This work has included fencing renewal, vegetation clearance and minor civil engineering works such as the creation of access points, walking routes and access steps.

In the Trent valley, the fencing work has included the erection of palisade fencing at approximately 2 metres from the running line as a protection barrier, allowing people with no railway safety training to widen the track formation from two track widths to four in complete safety. In certain areas, where the new earthworks were at a higher level than the railway, steel and timber catch fencing was also erected to prevent rocks and earth fouling the running lines.

In addition, the Company erected several thousand metres of permanent and temporary sound barrier, to reduce the impact of the noise of passing trains on the owners of adjacent properties.

Vegetation clearance was carried out to allow upgrading of the railway electricity supply system, and widening of the running lines from two tracks to four.
This work is ongoing. hw martin fencing contractors are specialists in fencing, vegetation clearing and management and minor civil engineering works 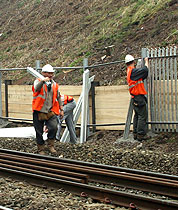