This project lasted until 2004 during which in excess of 350km of fencing was erected. Much of the fencing was steel palisade type, but steel meshes and stock proof post and wire fences were also installed. 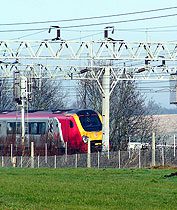