H W Martin Waste Ltd has been investing in youth and communities across the UK for many years and 2014 was no exception. Two examples were seen in support “close to home” – in the area around the company’s Derbyshire headquarters.

In early 2014 the company was a sponsor at the coveted Rotary Club of Mansfield Courage Awards, held on 5th March at Mansfield’s Civic Hall. The Awards are now in their 22nd year and Rotary president, Paul Bacon, summed up what the Awards are all about: “Courage is not only showing bravery in the face of danger, more often courage is the day-to-day determination and hard work of dealing with, adjusting to, and hopefully overcoming, the obstacles and harsh realities that life may present.” 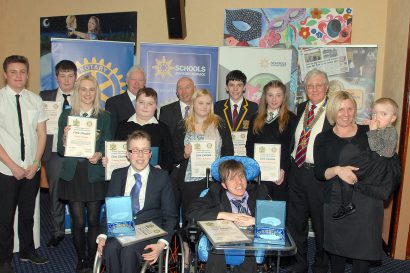 Nine young people were given the Award and H W Martin Waste Ltd sponsored two-and-a-half year-old Georgia Carlin, nominated by Mansfield-based charity A Place To Call Our Own and the youngest of all the nominees. Georgia has a skull condition that threatens her brain development and the brave toddler has recently undergone specialist surgery. Despite the 24-hour care that she is required to receive, Georgia remains “positive” and “smiley” and is described as “an inspirational ray of sunshine”.

To be eligible for the Young Sports Coach of the Year Award nominees must be under 25, qualified as an unpaid sports leader or coach, committed to the development of themselves and others, and be a positive role model. The standard of entries was exceptionally high, so much so in fact that the judges Awarded two nominees – Robert Martin of Newton, who volunteers hundreds of hours of his time each year as a ju jitsu coach; and Zoe Spence of Shirebrook, who is a gymnastics coach, club judge and gives coaching sessions as well as one-to-one mentoring.

The company was especially pleased that our sponsorship helped four Award-winners to be recognised and we fully supported the judges in their decision.

H W Martin Waste Ltd has been operating since 1999 and for almost the whole of those first 15 years the company has been supporting, sponsoring, training and mentoring school, community, voluntary and charity organisations across the UK. Mark Faulconbridge, Operations Director, explained why: “First of all, congratulations to this year’s Award winners and to all the nominees, each of them deserves recognition and respect for what they achieve.

“Ours is a people business, both in the fact that we employ hundreds of people in many regions of the country, and also because what we do is for the community. Most of our work is for local councils and we are the “face” of the council when it comes to the local services we deliver. We work in the heart of your community and we think supporting and sponsoring these great causes is a big part of that. We intend to carry this on into 2015.”