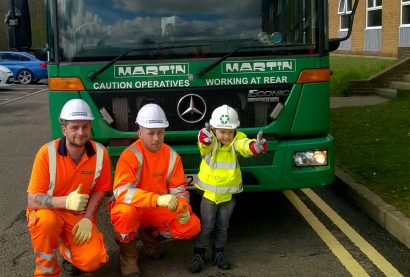 H W Martin Waste Ltd was able to make a young boy’s dream come true last Saturday (16th April). Oliver Cooper from Dronfield in Derbyshire is fanatical about bin lorries and bin men, when our collection crew pulls up in his street Oliver rushes out to offer a helping hand and have a chat. Not bad for someone approaching only his 5th birthday!

Claire Cooper, Oliver’s mum, says he is “obsessed with bin lorries and recycling”. This prompted her to come up with a special birthday treat for Oliver – being a bin man for the day – and she contacted H W Martin Waste Ltd to see if there was anything we could do.

Oliver is clearly our number 1 fan so it was our pleasure to invite him to H W Martin Waste Ltd’s Alfreton Recycling Facility (ARC). Karl Brough, the site manager, and Steve Rhodes, the transport manager, made sure Oliver had the time of his life on his visit. They came up with some activities that Oliver’s mum knew would be a hit.

Oliver met David Cracknell and Lee Bancroft from his local collection crew and Oliver was presented with his own specially made set of PPE for him to wear and take home – a personalised hard hat, hi-vis jacket and safety gloves. David and Lee took Oliver on a VIP “hunt the bin” tour of the ARC’s perimeter roads, where Oliver had to look out for 10 burgundy recycling bins. At each one Oliver helped the crew empty the paper out of the caddy in the top of the bin, into the back of the bin lorry. Then Oliver helped the crew operate the bin lorry and tip the mixed recyclable materials from the wheeled bin into the back of the lorry. 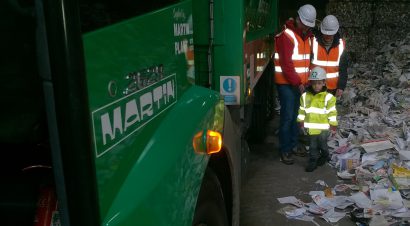 Once hunt-the-bin was over, Oliver was taken into the main hall of the ARC and shown where the bin lorries empty paper into piles to be sent for recycling, and where the mixed recyclable materials were piled up, ready to go through the sorting process.

After all that work Oliver had a well-earned rest! He went into the offices where he had more great surprises – a birthday card, a gift of a Lego bin lorry construction set and two birthday cakes. He was also presented with a special Certificate of Appreciation from H W Martin Waste Ltd in recognition of his recycling work and his unwavering support of our bin collections team. 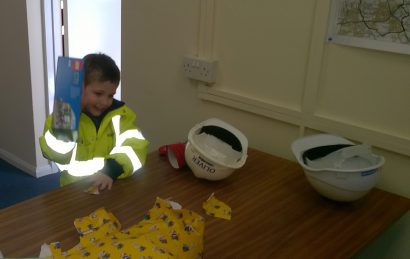 Claire Cooper wrote in to thank the staff at ARC: “I wanted to say a heartfelt thank you for Saturday. Oliver absolutely loved every single second of it. Your generosity is unbelievable and we as a family are overwhelmed at the trouble you went to for Oliver. It was a day that he and we will never forget.”

Speaking on behalf of the company, Karl Brough commented: “His mum was right, Oliver is obsessed with bins! It was a pleasure to do this for him and he is a champion recycler. The company was fully behind this and keen to do the lad proud. Judging by the look on Oliver’s face the whole time he was here we certainly managed that.” 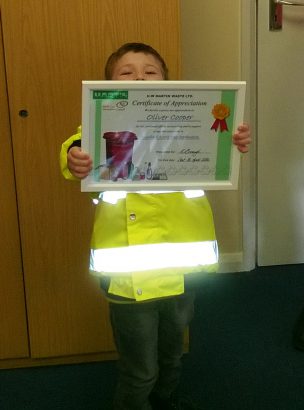