Each year H W Martin Waste Ltd sponsors the Mansfield Rotary Club’s annual Courage Awards. The Awards give well-deserved recognition to youngsters from the area for their bravery in adversity.

More than 100 guests attended the Awards at Mansfield’s Civic Quarter on 7th March 2017 to witness more than a dozen young nominees.

H W Martin Waste Ltd sponsored 12 year-old Kacey Cotton of Queen Elizabeth’s Academy. When Kacey’s leg was being examined after a bad fall doctors discovered a tumour. This prompted further tests and was a difficult time for young Kacey. Although benign the tumour could cause issues in the future.

Kacey’s positive attitude throughout her ordeal was inspirational – to her teachers, peers and friends alike. In fact she has now set her sights on becoming a doctor and is working hard at her school work in order to achieve her aim. 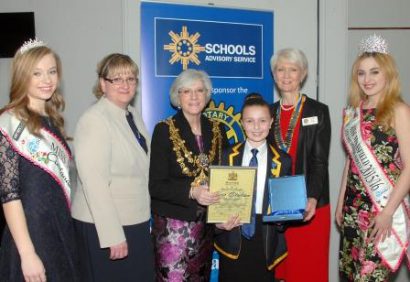 Kacey was presented with her Award by Cate Hunt, Rotary Club President, and Mayor of Mansfield Kate Allsop.