HW Martin News
Keep up to date with how we are continually moving forward with new developments and improvements. 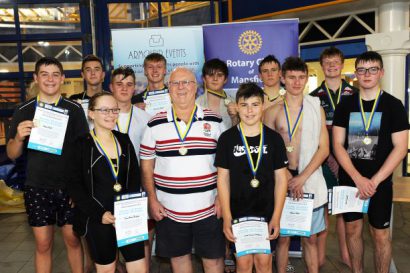 The weekend of 12th and 13th October saw Mansfield Rotary Club host its first ever Swimathon. It was held at the Water Meadows and Rebecca Adlington Swimming Centre.

Entrants were challenged to see how many lengths they could swim in 15 minutes. Swimmers obtained sponsorship per mile or a fixed amount, with half of the proceeds going to the swimmer’s chosen charity and the other half going to the Rotary Club of Mansfield and the Armchair Club.

HW Martin Waste Ltd was one of two businesses who sponsored the event. The company is based on the Derbyshire/Nottinghamshire border and contributes to the success of many local initiatives aimed at supporting young people in sports, caring and community activities.

Entrants at the Swimathon included many individuals and groups. Also attending and giving their support were Paralympic swimming medalist Charlotte Henshaw and Commonwealth Games swimmer Elliot Clogg. Olympic medal-holder and local heroine Rebecca Adlington also sent a message of support and encouraged all involved to make the event a regular on the calendar.

The Rotary Club is pleased to report that the event raised almost £2,000. This money will be used to support local charities and sports clubs and means the Rotary Club of Mansfield and the Armchair Club can continue with their great work in the communities they serve.