Cycling from one side of England to the other is not for the faint-hearted. Especially when you start in Morecambe in the west and negotiate some of England’s most hilly terrain on the route to your destination in Bridlington on the east coast.

The “Way of the Roses” coast-to-coast is over 170 miles and is one of the most popular cycle routes, passing through many towns and cities including York, Lancaster, Settle and Ripon.

Paul Wilkinson, H W Martin Waste Ltd’s Facilities Manager, and his fellow cyclists set themselves the challenge of completing the route, hoping to raise a few hundred pounds for Cancer Research UK in the process. The five of them set off from Morecambe on the last day of May and took three days to reach Bridlington. Now that all donations have been counted Paul and the team were astonished to find they raised over £2,000 for the charity.

All of Paul’s colleagues at H W Martin Waste Ltd are proud of his achievement. Speaking after the challenge, Paul said: “I am really pleased to have done it, but some of those hills were terrible!” 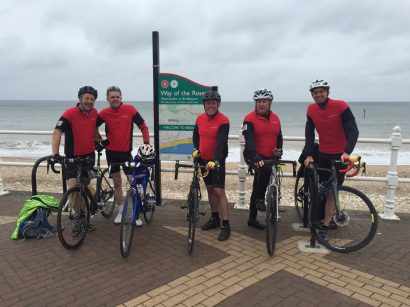 Paul (centre) with fellow cyclists at the finish post in Bridlington